After a prolonged stay with my son in Southern California, more like Hotel California (once you go in, you can’t leave), being back on the road traveling home seemed like a wild and carefree adventure. One of the early stops, Lone Pine, nestled below Mount Whitney, offered the delightful opportunity to drive the Mount Whitney portal and get a refreshing up-close look at the marvelous mountain, splendid in its vertical height and surrounded by smaller stiff peaks poking into the cerulean blue sky.

Becoming acquainted with Mount Whitney merely required a search through Google, which took me to the Sequoia and Kings Canyon Nation Parks site. Mt. Whitney is the tallest mountain of the lower 48 states. The elevation at the summit is 14,464 feet. This impressive mountain lies on the boundary of the Sequoia National Park and the Inyo National Forest. If you have ever read John Muir, this area of the country is breathtaking and takes years to explore its delights fully.

The shortest route to climb Mt. Whitney is from the Whitney Portal trailhead, 13 miles west of Lone Pine on the east side of the Sierra. While it was clear that a 10.7 miles hike with ice axes and crampons was not a likely undertaking, the drive up to the trailhead seemed doable on the winding but paved road. 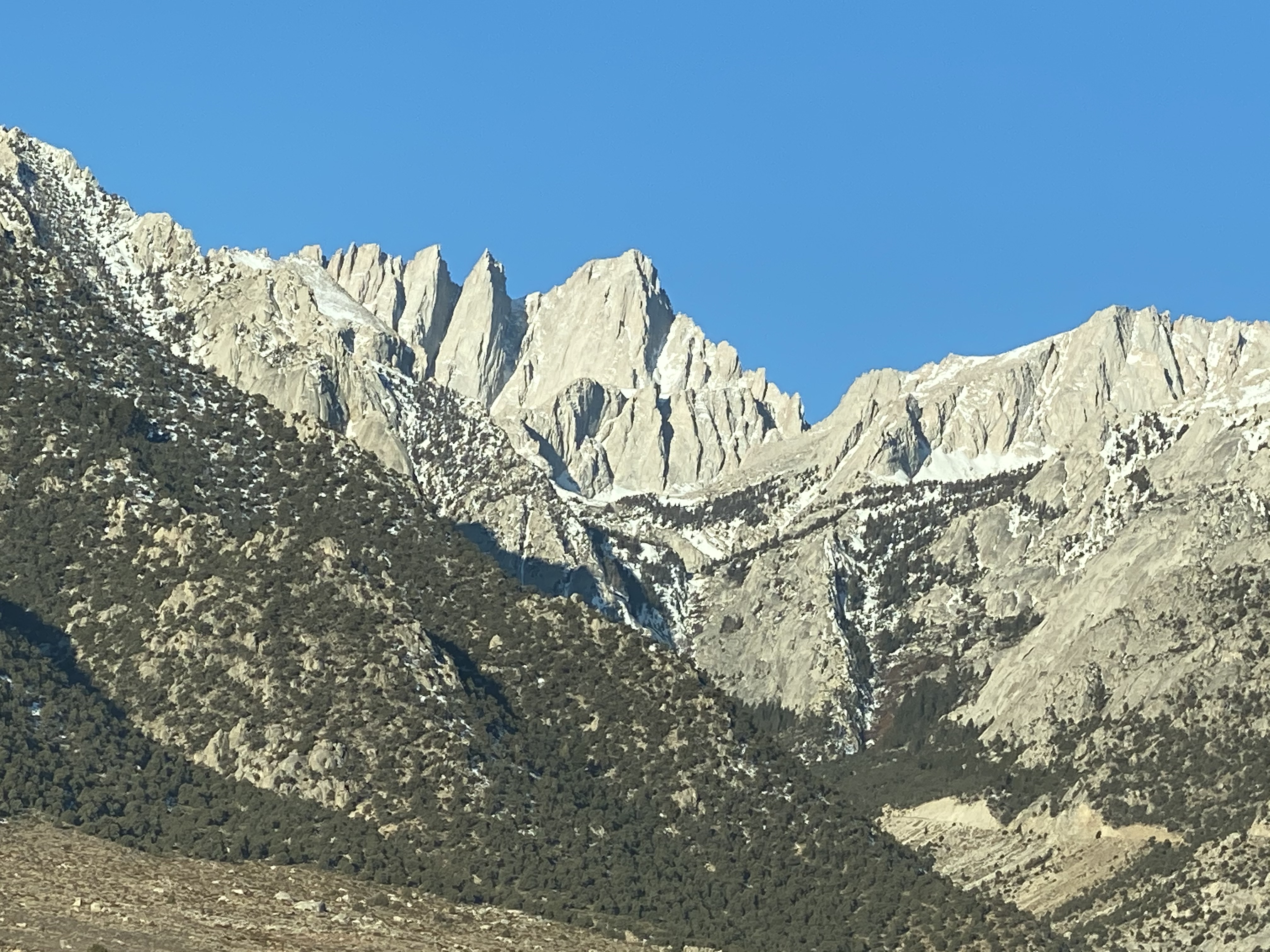 The road below these majestic peaks, and there are many, was almost thrilling by itself as we climbed upward. Initially, the road was so flat, and we had no way of knowing what lay ahead.

We climbed rapidly and then began switchbacks. As crazy as it sounds, I was gripping the indoor side grab as we ascended. The views became more spectacular as we climbed. Suddenly we came to an end of one section of the road, and there was a partial road closed barrier only about a third of the way into the road. Assuming this was due to a prior event and hadn’t been fully removed, we went around it and headed up the steep incline to access the trailhead and see the full magnificence of Mt. Whitney.

Climbing steeply, we came to a patch of ice on the opposite side of the road in the shade created by the side cliff area. There were no protective barriers along any section of the road, but there was a narrow dirt shoulder. As the climb became steeper and the road more complicated, we became nervous and decided we should turn around and head back to the main road into the portal.

All was well until we came around a sharp switchback, hit the patch of ice which we hadn’t considered and went into a terrifying slide across the narrow road over to the shoulder, and on the way over the side into what would have been a massive roll-over down to the floor of the valley. We stopped sliding towards the shoulder, and my husband started yelling, “Get out!” “Now!” I refused as at this stage of life, I am very philosophical about my end.

Inching along, we could steer back into the less icy lane and slide onto the lower black pavement. We sat quietly for a while and then chatted about fear, close calls, and the reality of the excitement of spontaneous adventures in life.

Working had been a way of life for me since I was about 10 years old. Frequently I worked at my profession and taught potential student teachers in a college graduate program, and wrote books by night. When I decided to retire I was not sure I could fill my time and find meaning in retirement. Well, I have! Hopefully this information will help you!